Like many children with Cerebral Palsy, we tried a number of ways for Jonathan to communicate.   Fortunately, from quite an early age Jonathan developed a clear ‘yes’ and ‘no’ face for things he was asked about and really cared about.  He has also at various times been able to verbalise words at quite random times, when he’s been relaxed and motivated.  They have been single words often needing interpretation, for example ‘nana’ for his sister Susannah.

Bizarrely one of the first things we were told to try was sign and we did.  We used mostly Makaton – as Jonathan was diagnosed with an auditory neuropathy (a type of hearing loss where the messages don’t get through to the brain correctly).  Bizarre?  Well at the same time it was obvious that Jonathan both could understand what we said to him, and also didn’t have the control of his own body to sign back.  Here he is doing the only sign he has ever been able to do, the wave: 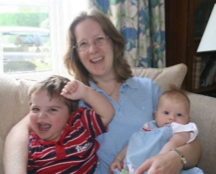 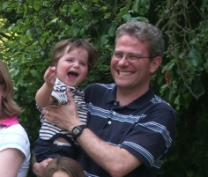 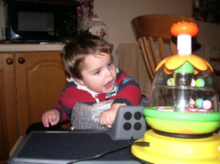 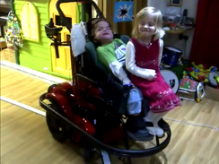 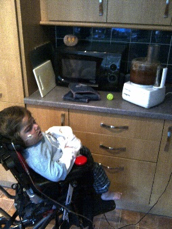 However, to use switches effectively for communication you need to be able to control your movement sufficiently so that you press the switch to indicate a choice.  Typically, this is done with a form of auditory or visual scanning so that a computer or device reads or highlights a number of choices and you press your switch for the one you want.  Unfortunately, this approach has a major downfall for Jonathan, he does not have enough control of his body to press one switch (let alone two switches) reliably when he wants to.

From a relatively early age Jonathan could choose by looking (and sometimes hearing) 2 or more options.  As shown here we would hold up 2 objects for him and he would look at the one he wanted.  This later became the key for unlocking Jonathan. 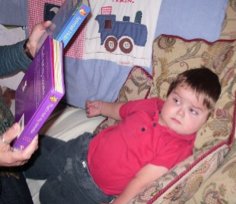 We tried eye gaze technology in the summer of 2013 shortly before he started a small amount of home education.   He enjoyed it, and worked hard with it, but there were a number of limitations of its use with Jonathan.  Firstly, he has a divergent squint in his eyes, so the computer found it difficult to ‘read’ him, because of this we had to reduce the number of cells on the page to increase the potential for accuracy, although accuracy has always remained a problem.  We also had to physically restrict Jonathan’s head movement so that he it was kept within range of the machine.

For accurate communication the eye gaze machine has never been very successful for Jonathan (he has tried several eye gaze cameras), but he still likes to use it now whilst sitting in his wheelchair, as Jonathan says “I find eye gaze great for games”.  Eyegaze technology did also teach us some valuable lessons – Jonathan could use a programme to combine letters and sounds to make words, he was a highly motivated learner, and we could see where he was looking even if the computer couldn’t. 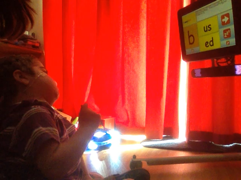 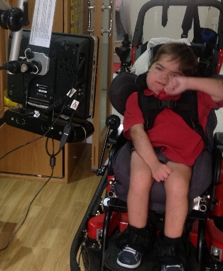 About the time that we started home education we tried using a paper based communication resource (designed by Sally Conner at Ingfield Manor School) for Jonathan that was dependent on him indicating ‘yes’ for the choice he wanted.  The first page is a Contents page which took Jonathan to different pages with their range of options. 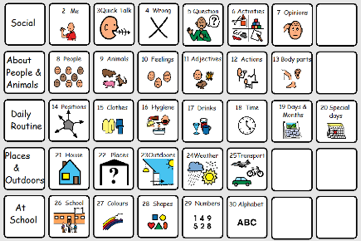 The first column contains the category headings for the rows, so I would read down the first column, giving Jonathan time to indicate ‘yes’ for his chosen option.  I would then read along the row until Jonathan chose again.  We then went to that page where the process was repeated.

For example, if Jonathan chose the ‘Social’ line and then ‘Quick Talk’ we would turn to the page below and he could choose what he wanted to say.  We had to model this approach to Joanthan so that he could learn how to use the book. 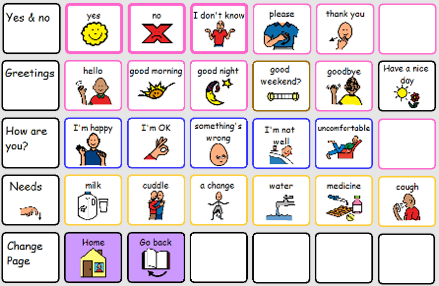 This way of communicating depended on his ability to follow auditory scanning and then indicate a clear yes when we got to the option he wanted.  It was time consuming, and often just at the point where Jonathan had chosen a number of options to get to the relevant page, he would switch off, which was immensely frustrating.  There are also some things that you don’t want to smile a yes to, for example indicating that you are in pain.  However, it did introduce more language and possibilities, although Jonathan has since told us “it was frustrating because I couldn’t talk in sentences or say what I wanted”.

Jonathan now uses his spelling board for most of his communication.  It works by looking at a square with a group of letters in it, then looking at a colour to say which letter you want in the group.  For every letter he spells there are 2 looks on the spelling board.  It is quite slow, although after a few letters we often predict the word he is trying to spell (particularly when he is chatting) and he then uses the tick or cross to indicate ‘yes’ or ‘no’.  He loves this spelling board, as do we – it has been the gateway to an unlocked child, but in order to use it he had to be taught to spell (more about that in the education section of the blog). 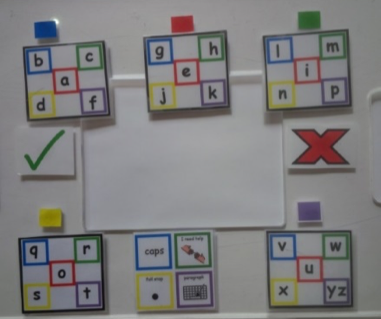 Here is a video of Jonathan using his spelling board:

As well as the spelling board we have a number of ‘flip’ books made up with questions / responses on them. We have one in the bathroom for Jonathan to choose which clothes to wear, one for Lego so he can make creations as independently as possible, and one always lives in his bag for children to use to chat with Jonathan.  Here is one he has with questions to ask his friends.  He wrote the questions on his spelling board, and his friends can pick up the book see where he is looking and then answer the question.  It is empowering for them, and it means he can chat quickly and easily with his friends. 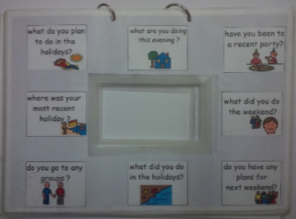 “It’s great because I can talk to Jonathan about Lego and superheroes. We communicate just like my other friends”.